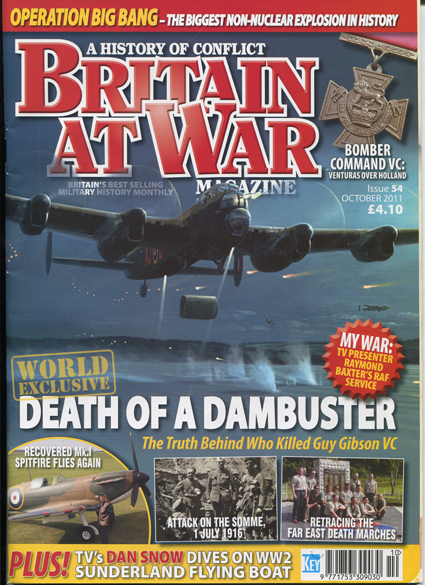 The article featured on the cover of this month’s Britain at War magazine has stirred up a certain amount of controversy.

(Coverage here in the Sun, Daily Telegraph, Daily Mail and on the BBC website.)

Provocatively entitled “Who Killed the Dambuster?” it claims to have unearthed definitive proof that on 19 September 1944 Guy Gibson’s Mosquito was shot down by “friendly fire” from a Lancaster of 61 Squadron, one of the aircraft in the strike force which he had just led on an attack on Rheydt and Mönchengladbach.
After the Dams Raid, Gibson had been removed from operational duties by senior RAF officers, worried about the propaganda consequences if he was shot down or taken prisoner. After 16 months away from the frontline, and with the invasion of Europe successfully negotiated, he managed to persuade the authorities to let him back on “Master Bomber” duties, supervising the marking of targets for other aircraft to attack. He was returning from the first of these operations, flying a unarmed Mosquito, when he crashed near Steenbergen in Holland. Both he and his navigator, Sqn Ldr James Warwick, were killed, their bodies so mangled that at first the remains found were assumed to be that of only one person.
A number of theories have been proposed as to the cause of the crash. Was the aircraft damaged by flak? Or shot down by a night fighter? Did the engines fail? Did a hung-up marker flare explode? Or was it an error, possibly caused by the pilot’s unfamiliarity with the controls of the Mosquito? In his 1995 biography, Richard Morris concluded that it was probably the latter, concluding that Gibson may not have known, or may have forgotten, about the necessity of switching fuel tanks, a duty usually undertaken by the navigator as the cock was positioned behind the pilot’s seat.
James Cutler, the author of the Britain at War article, claims that this last theory is wrong. He has come across a tape recording made in the 1980s by a 61 Squadron gunner, Bernard McCormack, who has since died. McCormack was the mid-upper gunner on Lancaster QR-V on the raid on Rheydt and his colleague, Sgt Maudersley, was in the rear turret. They had claimed that they had shot down a German JU88 at a debriefing after the raid, but the next day the intelligence officer had told them that it was in fact a Mosquito.
According to James Cutler, some of the material in the National Archives about the raid has been overlooked, but this may not be the case. Researcher Alan Wells has looked at the combat report compiled at McCormack’s and Maudersley’s debriefing, and also the one from another 61 Squadron aircraft QR-M, which opened fire on a JU88 some 20 minutes before. In a posting on the Stirling Forum, he concludes:

The combat report states that it was the A/B that saw the JU88 first, at a position given as “ahead and down”. It then moved to the “starboard down” position, where it was fired on by the M/U gunner, the R/G fired on it almost immediately after. On being fired on, the aircraft then moved to “dead astern” and attacked the Lanc, which went into a corkscrew, as it did this, the two A/G’s opened fire again, and the aircraft broke off the attack.
If this was Gibson, surely, after being fired on whilst in the starboard down position, why would he have been stupid enough to go dead astern and put himself in the firing line, instead of breaking away to safety, it does not make sense. 20 minutes earlier, another 61sqdn Lanc, was also attacked by a JU88, which started its attack from the starboard down position.

Alan Wells also points out that the gunners reported that the JU88 fired at them. Gibson’s Mosquito was not armed.

In the same forum, an actual Lancaster rear gunner veteran, Dennis Overs, suggested that if Gibson had really flown up behind a Lancaster it was tantamount to suicide:

It had been suggested that Gibson used to creep up on his crews in the stream to see if they were alert. My view at the time being that he would have been very aware that any such action on his part would have been potentially suicidal.
If the conditions on the night were quite dark, the gunner would have seen a faint outline of a twin engined a/c. creeping up on him. His reaction I believe was the correct one at that time. I certainly would have opened fire & called out corkscrew, seconds counted. The rear gunner had the advantage of his clear vision panel.
I suggest that the head on view of a Mosquito & JU 88 would have been difficult to confirm in the given time.
Even if conditions were clear, only a foolish mosquito pilot would have closed in on the rear of the a/c. in night fighter conditions.

Sgt McCormack’s tape recording, and the various documents, do make a plausible case for saying that Gibson was killed by “friendly fire,” something which is far too common in all sorts of wartime situations. However, all we can say at the moment is that the case is not yet proven.

9 thoughts on “Who really killed the Dambuster?”