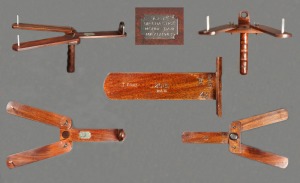 I’ve only had this blog up and running for about a week, but I’ve noticed that I already get many more hits on it than on the companion site devoted to my book. So with that in mind, I thought that I would draw the attention of my blog readers to the remarkable picture of an original Dambusters bombsight which recently came into my attention. This is thought to be the only original wooden bombsight still in existence, and it was used by Plt Off John Fort, the bomb aimer in David Maltby’s crew. Some time in mid 1943 it was given by David to his father (my grandfather) Ettrick Maltby. The full story is told here.

There has been a certain amount of scepticism as to whether any of the 617 Squadron bomb aimers actually used the bombsight (devised by Wg Cdr Dann) on the Dams Raid (Operation Chastise). Some of them certainly preferred their own makeshift sights and used chinagraph marks and tape on their Perspex blisters. But this artifact would seem to prove that at least one bomb aimer used the type that later became famous through the 1955 film. And he was the one that dropped the bomb which finally broke the Möhne Dam!

8 thoughts on “The bombsight used to break the Möhne Dam”