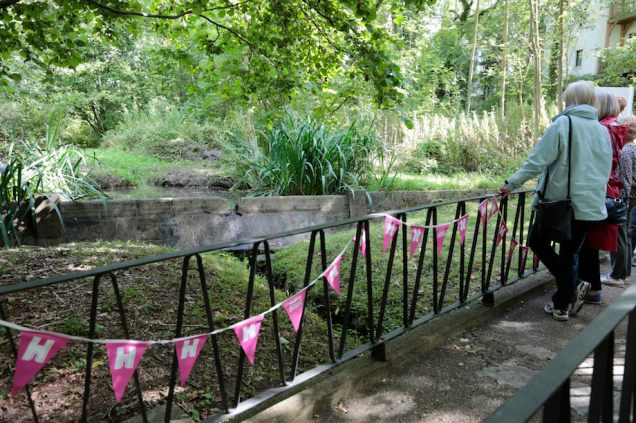 The UK-wide’s annual Heritage Open Day on Saturday 8 September means the public get their once-a-year chance to see the very first (and only surviving) test model of the Möhne Dam, used in the very early stages of the development of what became the Dambusters’ bouncing bomb. This is housed at the premises of the Building Research Establishment at Garston, near Watford.

This free-to-attend event will not only allow access to the model dam, with talks on BRE’s role in the story repeated through the day, but also allow behind-the-scenes access to many of BRE’s current test facilities.

There will be talks and presentations repeated through the day about the role of BRE in the Dambusters raids, and also about the B17 Bomber ‘Choo-z-suzy’ that crashed on the site in 1943.

The story of how the BRE became involved is because of the friendship of two men who had met while studying engineering at Queen Mary College, University of London. They were Norman Davey, who was one of the then Building Research Station’s first staff, joining as a research assistant in November 1921. His colleague William Glanville joined as an engineering assistant in November 1922. Glanville left BRS in 1936, to become a Director of the newly-formed Road Research Laboratory at Harmondsworth in Middlesex.

At the outset of the war a team of BRS engineers, who had been working on the effects of explosives on structures since before the war, were transferred to the Road Research Laboratory. Led by A.R. Collins, they had also identified the Möhne Dam as a possible target.

Hearing about this work, Barnes Wallis met Collins and Glanville, along with Dr A.H. Davis, RRL’s assistant director, and they discussed how much damage would be caused if a large explosion occurred on the upstream side of the Möhne Dam, very close to the wall. On an unknown date in late 1940, Glanville and Wallis then held a meeting with Davey, and they decided that the most effective way to determine both the weight of explosive needed and the optimum location for it to breach the dam was to construct a scale model – and then blow it up. Davey agreed to build the model in a secluded area of the BRS’s Garston site, and so work began in November 1940. Some two million miniature concrete blocks were made, and the construction took about six weeks. The model was completed on 21 January 1941, and the first explosive test took place the following day. In all, ten explosions were carried out and the model was badly damaged. This is the model (now a listed structure) which the public can view on the Open Day.

The largest structural test hall in Britain, the wind tunnel and (possibly) the quietest place in the UK will also be open for tours and demonstrations, as will other attractions. In order to gauge numbers for the catering and (free) onsite parking, people are asked to register at the BRE website .

The first 1000 visitors through the gates on 8 September will also receive a free ticket to Grand Designs Live in London in October.