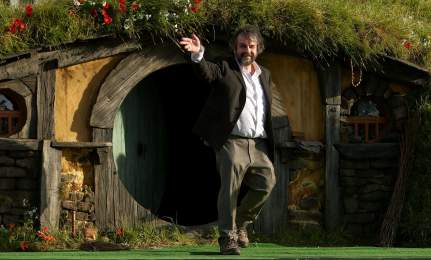 Peter Jackson has been giving interviews to mark the end of the process of making The Hobbit trilogy, which combined with the Lord of the Rings make up a series of six films that have taken his company almost fifteen years to complete. Already the films have grossed $4.89 billion in worldwide box office takings and by the time The Battle Of The Five Armies, the finale to The Hobbit trilogy, plays out, the total may reach $6 billion.
Now, in an interview posted on the Deadline blog, Jackson has admitted that he probably would have started on the remake of The Dam Busters four or five years ago, having handed over directorial duties on The Hobbit to Guillermo del Toro. But del Toro left this project in May 2010 and Jackson stepped back behind the camera, saying that it was important to protect Warner Bros’ investment. He admits that all the time since there has been pressure on him to say what he will be doing next:

I reckon that’s as near as we have come to a real commitment from Jackson to make the film. But when will it happen? He has a pretty busy schedule: Hobbit 3 is due for worldwide release in December 2014, and then there is the small matter of the second Tintin movie, scheduled for release in 2016, which he is also due to direct. (He did a deal with Steven Spielberg.) He won’t be directing The Dam Busters, but it will surely take up quite a bit of his time so it could fit into his schedule here – before a third Tintin movie, so far untitled.
If The Dam Busters is ever going to get to the clapperboard stage, the next thing to expect would be news that the difficulties with the screenplay have been ironed out, that the director is confirmed (a role earmarked eight years ago for Jackson protegé, Christian Rivers) and, most important of all, that Universal Pictures and Studio Canal are still behind the project.
Watch this space.

38 thoughts on “Jackson speaks: Dambusters a ‘wonderful story’ which I will have to do. ”