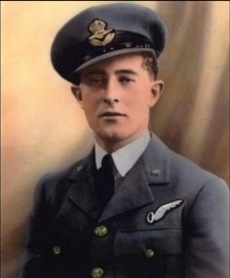 Donald Hopkinson was born on 19 September 1920, in Royton, near Oldham in Lancashire, the second child of Harold and Sarah Hopkinson. His mother died of cancer when he was four months old, and his father remarried. He was educated at Chadderton Grammar School, where he excelled at cricket, and worked as a clerk before volunteering for the RAF in early 1941. After initial training in England he was selected for training as an air observer and sent to Canada. He qualified as a bomb aimer in May 1942, and was commissioned.

Hopkinson was posted to an Operational Training Unit in the summer of 1942, and crewed up with Floyd Wile, Albert Garshowitz and Richard Bolitho, with Max Stephenson as their pilot. In October 1942, all five were sent for heavy bomber training to RAF Wigsley and Frank Garbas and John Kinnear were added to the crew.

When they were ready for operational flying, the whole crew was posted to 9 Squadron. However, before they could fly together Max Stephenson was killed on a ‘second dickey’ operation.

Without a pilot, the crew was then shipped to 57 Squadron, and allocated to Bill Astell. After eight operations, Astell’s crew was moved to 57 Squadron’s C Flight, under a new Flight Commander Melvin Young. On 25 March all five crews in the flight were transferred to the new 617 Squadron being formed at the same station.

On his last home leave early in May 1943, Hopkinson mentioned to his family that he had a bad premonition about the forthcoming operation. Unfortunately he was correct and from his position in the nose of AJ-B he must have suddenly seen the HT cables and pylons in its path, realising perhaps that they could not avoid them.

Donald Hopkinson is buried with his comrades in Reichwald Forest Cemetery, having been reinterred there after the war.

Further information about Donald Hopkinson and the other 132 men who flew on the Dams Raid can be found in my book The Complete Dambusters, published by History Press in 2018.

3 thoughts on “Dambuster of the Day No. 54: Donald Hopkinson”