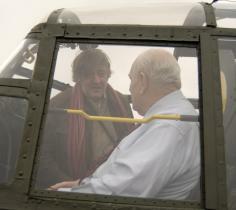 I’m sorry to have to report that Ray Grayston died on Thursday 15 April.
Grayston was the flight engineer in Les Knight’s Lancaster, AJ-N, the ninth and final aircraft of the first wave of Operation Chastise, tasked with attacking the Möhne and Eder Dams. Five mines had been used at the Möhne before it had been breached, which left only three for the Eder, as Bill Astell had crashed en route. David Shannon and Henry Maudslay dropped their mines but did not break the dam, so Knight’s weapon presented the last chance for success.

As the engineer, Grayston sat on Knight’s right hand side as the pilot brought the Lancaster down to the required height of 60ft, using the throttles to keep the speed at 220mph. After a dummy run, which was dangerous enough for rear gunner Harry O’Brien to record afterwards that he ‘never thought they would get over the mountain’ on the other side of the dam, Knight brought AJ-N into attack. With a bright moon on the starboard beam, the mine was released, bounced three times and hit the dam wall. Knight climbed steeply and, as the aircraft reached a safe height, saw an explosion which caused a ‘large breach in wall of dam almost 30ft below top of dam, leaving top of dam intact.’
Wireless operator Bob Kellow had his head up in the astrodome, looking backwards. It seemed, he said ‘as if some huge fist had been jabbed at the wall, a large almost round black hole appeared and water gushed as from a large hose.’
The climb after the attack had been hair raising. Bomb aimer Edward Johnson said later that it ‘required the full attention of the pilot and engineer to lay on emergency power from the engines and a climbing attitude not approved in any flying manuals and a period of nail biting from the rest of us not least me who was getting too close a view of the approaching terra firma from my position in the bomb-aimer’s compartment.’
Like many young men of his generation, Ray Grayston was fascinated by flying and volunteered for the RAF at the beginning of the war. In a TV documentary to mark the 60th anniversary of the Dams Raid he described how he loved riding a motorbike at speed, and that this was one of the things which encouraged him into the air force. Initially he served as ground crew but then, along with many others who were mechanically minded, he was selected to train as a flight engineer on the new generation of heavy bombers which needed more personnel.
In late 1942, Grayston teamed up with Knight and the rest of the crew in their final stages of training, and they were part way through a tour of operations in 5o Squadron, stationed at RAF Swinderby, when they were offered the chance to transfer into a new squadron being formed at nearby Scampton for a secret special mission. They went as a group, as Kellow later explained: ‘The offer presented to us sounded interesting and with our faith in each member’s ability we made up our minds there and then that we would accept the offer and move over as a crew to this new squadron.’
Like many Lancaster crews of the time, they were from different countries and walks of life. Knight and Kellow were Australians, the gunners were both Canadian and the rest were British. Knight was an exceptional pilot even though, as Grayston later recalled, he couldn’t ride a bicycle or drive a car.
They didn’t fly over Germany again until September 1943, four months after the Dams Raid when they were sent out with another new weapon, a 12,000lb ‘thin case’ bomb, to attack the Dortmund Ems canal. It was a terrible night, with heavy fog blanketing the heavily guarded canal. Four of the eight crews who took part had already been shot down when Knight, flying at about 100ft in fog, hit some trees and badly damaged both his port engines.
This is one of the stories which Paul Brickhill tells beautifully in his 1951 book, The Dam Busters. With his tailplane and a starboard engine also damaged Knight managed to pull the Lancaster up to about 1,000ft and called his fellow Aussie Mick Martin, who had assumed command after the CO and deputy force head had both come to grief.

‘Two port engines gone. May I have permission to jettison bomb, sir?’ It was the ‘sir’ that got Martin. Quiet little Knight was following the copybook procedure, asking respectful permission to do the only thing that might get him home.
Martin said, ‘For God’s sake, Les, yes,’ and as the bomb was not fused Knight told Johnson to let it go. Relieved of the weight they started to climb very slowly…
The controls were getting worse all the time until, though he had full opposite rudder and aileron on, Knight could not stop her turning to port and it was obvious that he could never fly her home. He ordered his crew to bale out and held the plane steady while they did. When the last man [who was Grayston] had gone he must have tried to do the same himself,and must have known what would happen when he slipped out of his seat. There was perhaps a slight chance of getting clear in time, but as soon as he took pressure off stick and rudder the aircraft flicked on her back and plunged to the ground. Knight did not get to the hatch in time.

Grayston told the story again in a History Channel documentary, which you can still see online. He and the other five all landed safely. Three evaded capture but Grayston and O’Brien were captured and spent the rest of the war as PoWs. When the crew survivors met in later life they would toast the memory of the young pilot who had saved their lives.
Of the 133 men who took part in the Dams Raid only 48 survived the war. Over the last few years, this has dwindled to a handful and sadly now only Les Munro, George (Johnny) Johnson, Fred Sutherland and Grant MacDonald are still with us. Like them, Grayston had become something of a celebrity in his later years, and was regularly to be found taking part in documentaries, commemorations and signings. On all these occasions he was a model of courtesy, even when he was being asked to sign memorabilia by people only interested in making a profit from it on Ebay.
It’s something of a cliché to say that we won’t see the like of his generation again – but in Ray Grayston’s case it is certainly true. He was looking forward to seeing the remake of the 1955 film, and had been photographed at East Kirkby sitting with writer Stephen Fry in the cockpit of the Lancaster belonging to the Lincolnshire Aviation History Centre.
UPDATE: Daily Telegraph news article about Ray Grayston here and a formal obituary here.